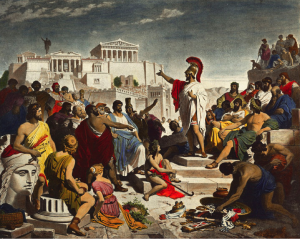 “(Democracy) is the worst of all lawful governments, and the best of all lawless ones.”
-Plato

“The ideally best form of government is that in which the sovereignty, or supreme controlling power in the last resort, is vested in the entire aggregate of the community, every citizen not only having a voice in the exercise of that ultimate sovereignty, but being, at least occasionally, called on to take an actual part in the government, by the personal discharge of some public function, local or general.”
-John Stewart Mills

“(In democracy) the whole power of education is required.”
-Montesquieu

“It is only the Athenians, who, fearless of consequences, confer their benefits not from calculations of expediency, but in the confidence of liberality.”
-Thucydides

“The violent destruction of life and property[…]”
Excerpt From: Dr. Chad Redwing. “Culture and Values of the Western World: Syntopical Course Guide.” Available for purchase at iBookstore and Kobo.