Everyone Can Learn about Western Monotheism

23 Sep Everyone Can Learn about Western Monotheism 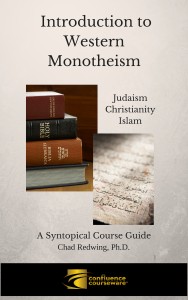 In the course we will be focusing in-depth on the origins and development of the three Western monotheistic religions: Judaism, Christianity and Islam. We will focus on the sacred texts of these three religious traditions—the Torah, Nevi’im and Ketuvim and the New Testament in The Holy Bible, and the Qur’an—as well as their rituals and celebrations and the music, art, cinema, philosophy, poetry, drama, literature and architecture inspired by monotheistic religious belief and practice. That is to say, we will be looking at how these monotheistic cultural traditions answer the questions: ―Who are we? ―Where did we come from? and ―Where are we going? We will also briefly look at the physical geography, history and politics of the peoples and lands most influenced by Judaism, Christianity and Islam. Emphasis on comparative readings of sacred texts.