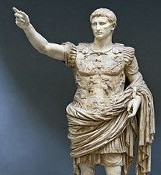 (Caesar Augustus, “Statue-Augustus” by Till Nierman – Own work. Licensed under CC BY-SA 3.0 from Wikimedia Commons)

Discussion #3: Question: How does Roman art (including sculpture, monumental architecture and literature) serve as propaganda for the power of the emperor?

There are many words to describe tyrannical rulers—they are despots, dictators, autocrats-what they all have in common, despite linguistic subtleties of political science, is that they rule by fear. To go against a tyrant is to risk torture and death, loss of property, the harm of loved ones, and the ruin of your reputation by slander. Although there are a few throughout history who have tried to justify the “benevolent dictator” or the “just tyrant,” often appealing to efficiency, order and a well-disciplined body politic, the reality is that hate and fear are the tools of tyrants, not love or admiration.

The question then becomes, how do tyrants come about? Under what conditions does absolute rule by the concentration of all political power in the hands of one person even happen? What are the mechanisms used by a single individual to keep millions under control? Why don’t people simply revolt?

Outside of these discussions on the causes of tyrannical rule, its maintenance and puzzling duration, there are many other questions to ask about the effects of despotism. How does tyranny affect the individuals who live under a regime of fear? What are the psychological, social and cultural effects of despotism? It is this last set of consequence that this chapter most fully explores.

After the assassination of Julius Caesar, Rome devolved into an imperial despotic regime—the emperor ruled supreme. So, what are the cultural consequences of living for almost 500 years under this type of fear and imperial rule? Perhaps even more terrifying, in what ways do tyrants use cultural production to control a population?

2) What are the effects of tyrannical rule on society, cultural production and individuals living under despotic regimes?

3) Why do people allow tyrannical regimes to exist and, furthermore, why do citizens of a society often facilitate or openly aid a despot? Are there any advantages to tyrannical rule and for whom? Who is the most disadvantaged by despotism?

Excerpt From: Dr. Chad Redwing. “Culture and Values of the Western World: Syntopical Course Guide.” Available for purchase at iBookstore and Kobo.