Kennedy and Quotations about the Great Idea: Tyranny and Despotism

21 Sep Kennedy and Quotations about the Great Idea: Tyranny and Despotism 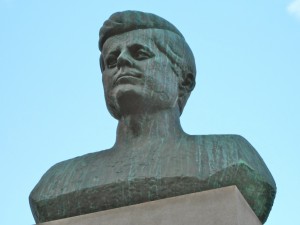 “(Tyrants) are always either the masters or servants and never the friends of anybody; the tyrant never tastes of true freedom or friendship.”
-Plato

“Tyrannical government is altogether corrupt…(the tyrant is) guilty of sedition, since he encourages discord and sedition among his subjects, that he may lord over them more securely.”
-Thomas Aquinas

“The accumulation of all powers, legislative, executive, and judiciary, in the same hands, whether of one, a few, or many, and whether hereditary, self-appointed, or elective, may justly be pronounced the very definition of tyranny.”
-James Madison

“The type of oppression which threatens democracies is different from anything there has ever been in the world before…Such old words as ‘despotism’ and ‘tyranny’ do not fit.”
-Alexis de Tocqueville

“…inspire fear in such a way that, if he does not win love, he avoids hatred.”
-Machiavelli

Excerpt From: Dr. Chad Redwing. “Culture and Values of the Western World: Syntopical Course Guide.” Available for purchase at iBookstore and Kobo.